Right, you've just arrived in Brussels, you don't know what time it is and maybe you are already a bit thirsty - in the end you are in Brussels, Belgium, the beer capital of Europe. Your fist steps? but to visit Brussels downtown, of course, who doesn't want to see the city centre of the capital of Europe?

Don't be put down by the amount of tourists on the streets, Brussels is an interesting city full of wonders. So, let us give you some quick hints and suggestions to what to do, while you enjoy a bit of the Brusseleir culture.

Ah, and yes, do not despair. In Brussels, you can hardly walk for more than ten minutes without finding a good bar that would serve you a trappist or a lambic. Not only, most of them will include craft beer in their list, and some are little surprises that DraughtaCraft will make you discover overtime.

Walk around, there's lots to see!

Brussels, we cannot stop saying it, is an interesting city. Maybe not as bohemienne as Paris, as decadent as Lisbon or as grand as London or Rome, but the capital of Europe is a city whose beauties may skip your sight if you do not look well enough.

Brussels and its locals are a nice mix that belong neither the Flemish nor the Wallons, they're great people in love with their essence who will not stop making jokes about Belgium, Belgians and their capital. However, one thing they probably will not do is to celebrate it to you.

In any case, it is the thrilling experience of an international city, full of people from everywhere, but still very Belgian, small but the real capital of Europe. It is a city of contradictions, but also a place where little corners matter, where the light changes and brightens a corner you have yet to see.

The Grand Place - can we have a beer please?

First things first: go to the Grand Place (in French), or Grote Markt (in Flemish). Do not linger around, start your trip from here, then concentrate to the rest. Walk down and enter the square through one of the six alleys that lead to it. Once you are in the centre of the Grand Place, it is the time to open your eyes and look around. This is one of the most beautiful squares of Europe.

Lift your gaze and watch the marvel of the Hotel de ville, the most flamboyant of Belgium. The square dates back to the 12th century, and the guildhalls all around belong to each of the guilds who made the city famous in the Renaissance era - in fairness, they are not original, for Louis XIV decided to bomb the centre of the city in 1695. Each of the buildings can let you understand the power game between guilds in the years when the Flemish merchants ruled the north of Europe. You see a building in the shape of a boat, one with the symbols of wool merchants, one with golden decorations and one covered in stuccoes. It is maybe worth you read something about the Grand Place - literally: the big square - from your guide, you will get a gist of why and how the city has developed as well. 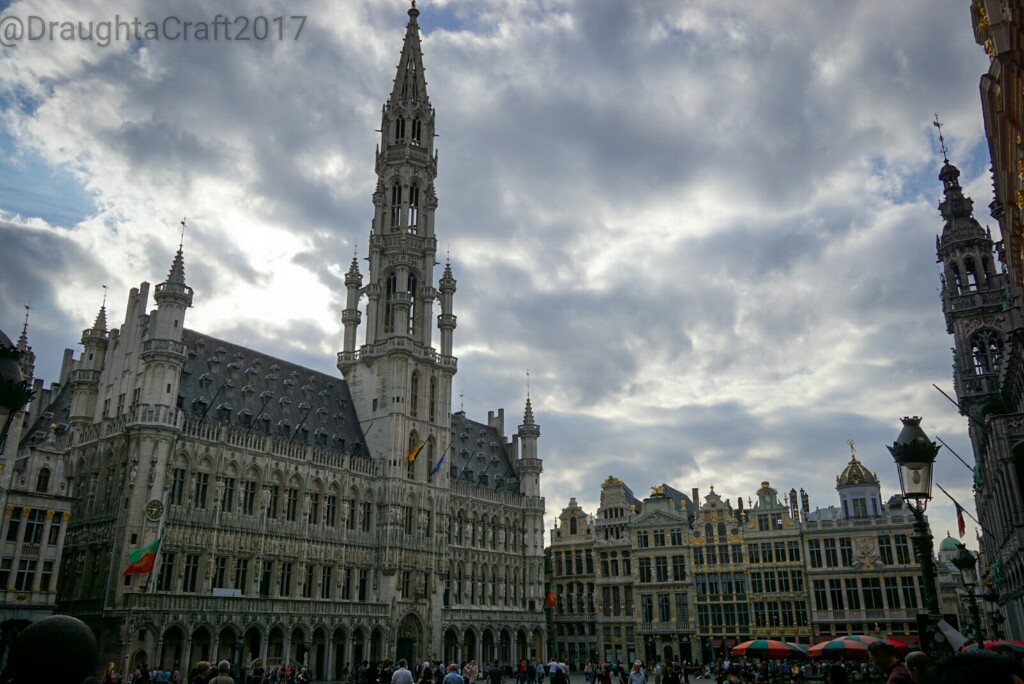 Ok, have you taken a bit of a breath reading about the sqare? now you can walk around. Exit the square out through the north-west corner and enter the Galerie de la Reine, a late 1800s glass-ceiling gallery where nice chocolatiers, fashion shops and delicacies fill up an harmonious space. Explore it to the end, but before you reach it, stop a second: on the left aile - section called the Galerie du Princes, in case they felt left alone - you will find one of the nicest bookshops in Brussels: Tropismes. I truly suggest you visit it. Unfortunately, most books are in french, with just a small section in English.

Now, get to the end of it. Across the street, La Morte Subite, the original location of nice preserved Art Nouveau bar. The well dressed waiters and huge mirrors on the windows make you think of another age. Do you want to have a beer here? yes, ok, it is an acceptable place where to sit and enjoy the time that goes by. Beerwise, though, the Lambics that they serve here are nowhere comparable to the real stuff.

Walk down the road, you'd have to turn right before we sit you down for a real crafty draught. You will find yourself at the back of La Monnaie, the Opera house of Brussels. The bar of the Opera house, Muntpunt grand cafe, is a nice for aperitifs if you feel obliged. Otherwise, before you end up shopping in Rue Neuve, turn around, and head back towards Rue de Dominicans. At the corner, the Churchill is a decent English pub with some selection of craft beer in bottles, we'll write more about it in the future. The area you just passed is called De Brouckere, a square more famous for cinemas and shopping than anything else, but keep it in mind as it is one of the easiest metro stops to get right in the middle of the city centre.

The old town, and Delirium

Back in the old town, the street you are in may make you think of some similar streets that can be found elsewhere; to me the many restaurants with waiters who want to drag you in, the tables almost to the mid of the road, the narrow walls have a reckoning of some super touristic parts of Venice, and maybe once Brussels was like that too. Actually, apparently Brussels until the 1800s was a city full of water, canals and even a city river port, all disappeared now. Sometimes I wonder how this city would have been.

By the way, the reason we brought you this way is that we want you to see the Delirium café. Figure that they even named impasse de la fidelité, the closed alley where the bar is, Delirium village! Here you are, you are surrounded by tourists, but you can indeed enjoy the bar, there are many beers you should try. Ivan wrote a nice piece on the Delirium café, read it while you sip a Delirium Tremens and tell us there what you think of this maybe a bit too touristy, and slightly much celebrated bar. 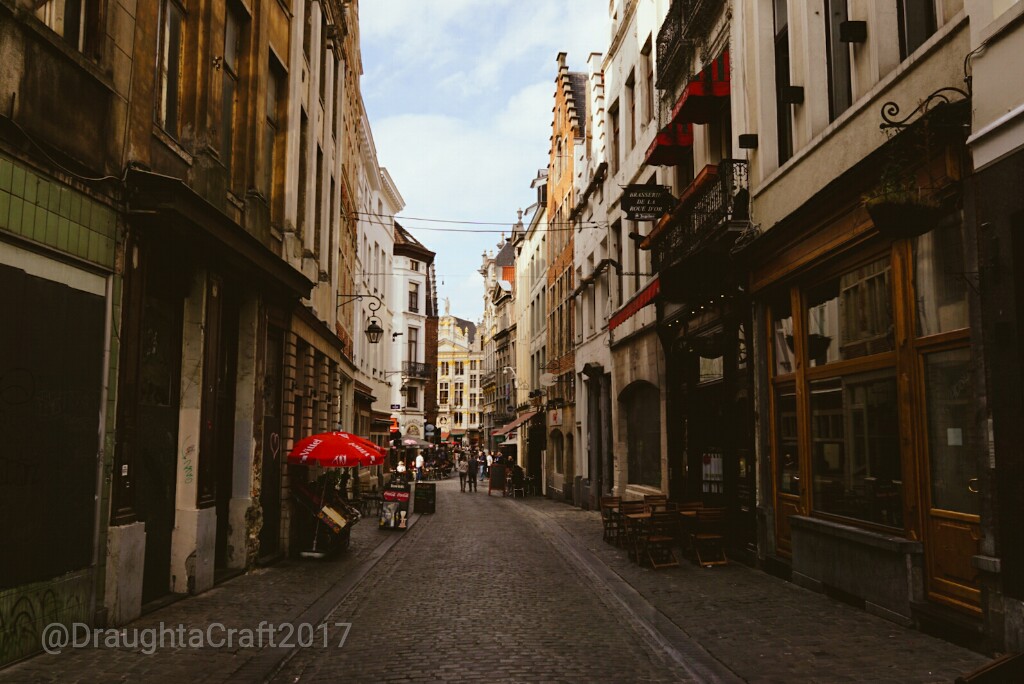 On the road again, you can roam the little streets and get a gist of the old town, as you see it is very similar to many cities around the area, particularly the Flemish cities like Bruges or Ghent, but few things have remained of the Brussels' pentagon as it once was. Curiosity: the pentagon is the shape of the old walls of the inner city. On some pavements, sometimes a symbol will tell you at what side of the figure you are, for you to get a clear orientation.

Turn left, and back into the main alley Rue de Flipiers that you saw in front of La Monnaie. Look for the sign of A la becasse, you will enjoy even only getting a peek of this very old establishment, hidden behind a building and reachable through a very peculiar corridor. They serve some nice geuze in clay jars, if you didn't have one at La Morte Subite, here's a much better place, even though with a bit less of an atmosphere.

Few steps more, and the massive imposing shape of the Bourse, the old Stock Exchange, now an exposition centre, will suddenly appear. 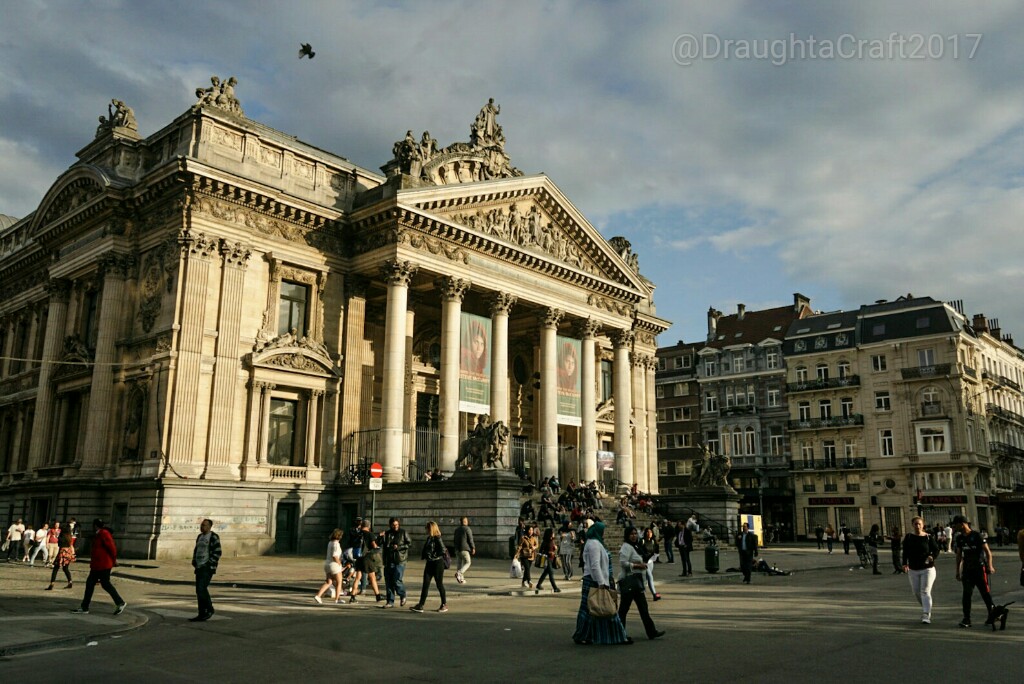 The building is quite nice, but it lacks some personality, so better you stick to the righter side and stop a moment in front of Le Cirio. This place used to be the forefront of the Italian tomatoes exporter warehouse. I love to bring people here, even though not for craft experiences, but because it is a place with a decadent retro vibe, custodian of truly Belgian invention, signature drink of the place: the half and half. Half champagne, half white wine, it deserves a try.

Around the Bourse, there are lots of areas and places where to see peculiar things and to enjoy food and drinks, but I think I have written enough for today, so I leave those areas for some other posts. Meanwhile, though, I want you to finish this brief tour with one of our favourites.

In Brussels city centre, there are exceptional craft beer places, but not so many with craft on draught. Moreover, many of them are a bit difficult to find, and rarely mentioned on city guides. One of those is bar Le Coq, a place with many excellent craft beer in bottles and decent boulettes and cheese to quench your little hunger.

Next, just around the corner, Saint Gery, Saint Catherine and the canal!